White Jews: Deal with Your Privilege and Call Out Jewish Support for White Supremacy 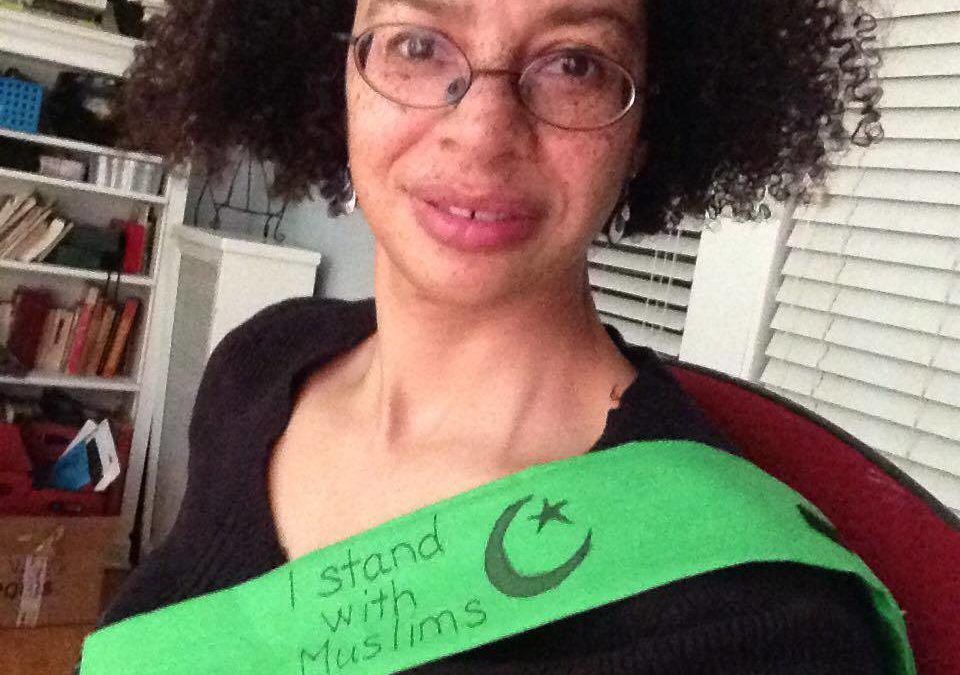 The following piece is the text of a speech by Lesley Williams at the Stephen Douglas Monument, on behalf of the Resists, Reimagine, Rebuild Coalition, August 19th 2017. It was orginally posted on her blog The Cranky Librarian and is posted here with her permission.

I stand here today as a Jew by Choice and the child and grandchild of the Great Migration, in which millions of African Americans fled racist terror in the South only to encounter redlining, discrimination and police violence in the north and midwest.

Like all of you, I have mourned and raged over the overt racism and antisemitism seen in Charlottesville. I have watched in horror as avowed racists defiantly parade in Klan robes and swastikas. I have listened to the anguish of Holocaust survivors and their descendants, as they are forced to confront the historical trauma of the Nazi era.

As both a Jew and an African American, I recoil from the white supremacy and antisemitism on display this week. I have been gratified to hear Jewish leaders and organizations call for the destruction of racism, speaking eloquently about the shared history of oppression Jews and African Americans have faced.

Yet, I confess to a certain discomfort in the many appeals to recognize the twin evils of antisemitism and anti black racism in Charlottesville. I’ve thought about this a lot over the past week, and here’s  what I’ve realized: for Jews, Nazi symbols evoke a terrifying, traumatic past. For African Americans, they evoke a terrifying, traumatic, unending present. White Jews may be shocked at this undeniable evidence of US racism; African Americans merely see more of the same. Black people did not need to be reminded by  hoods and swastikas that we live in a dangerously racist country.

White Jews are NOT under the same level of threat as people of color. In short, white Jews need to accept that they are white, and that whatever harassment or humiliation they may experience from anti-semites, they nevertheless dwell under the all encompassing shelter of white privilege. Police do not murder them in custody, their votes are not systematically undermined, they do not overwhelmingly live in poverty or adjacent to poverty. The 2 documented lynchings of American Jews, though horrific, pale in comparison to the nearly 4000 lynchings of black men, women and children in US history.  The lifestyle and life expectancy of the average white Jewish American is not materially different from that of the white, non Jewish majority; there is no institutional antisemitism.

Furthermore, white America is generally more accepting of discussing and acknowledging the history of antisemitism than they are the currency of anti-black racism.

One does not wish, in short, to be told by an American Jew that his suffering is as great as the American Negro’s suffering.

For white Jewish Americans, the US has always been the Promised Land. Yet African Americans know it is Pharoah’s Egypt.

Not only do white Jews of good conscience need to acknowledge that they are not the primary victims of white supremacy, they need to look at how their own institutions have  failed to challenge, and in some cases are openly complicit in its preservation.

For example, the Anti Defamation League, which presents itself as a champion of civil rights and “tolerance” once spied against the NAACP and the African National Congress,[2], [3] and may have been  responsible for the execution of an ANC activist in apartheid South Africa. [4] As JVP points out in our Deadly Exchanges campaign [5], the ADL, and other Jewish organizations like the American Jewish Congress, the Jewish Institute for National Security Affairs and Chicago’s own Jewish United Fund  all organize police, ICE and Homeland Security training exchanges in which American and Israeli police officers share tactics of oppression, teaching each other the aggressive, militarized police strategies which have led to the deaths of African Americans like Philando Castile, Freddie Gray and Laquan Macdonald; and like Palestinians Mahmoud Khalaf Lafy, Omar Ahmad Lutfi Khalil, and Siham Rateb Rashid Nimer [6]

Meanwhile, according to their own tax filings, many cities’ Jewish Federations, including Chicago’s Jewish United Fund [7] contribute generously to groups that the Southern Poverty Law Center has identified as leading anti-Muslim extremists, [8]  groups like the Middle East Forum and the Investigative Project on Terror, which laid the intellectual groundwork for Trump’s Muslim Ban. It’s no coincidence that these groups are all tremendously supportive of Israel’s brutal policies toward Palestinians.

Last summer when African Americans challenged white America to support the Platform for Black Lives, nearly every Jewish organization in the country condemned its indictment of the genocidal oppression experienced by Palestinians in Israel. None was more critical, dismissive and patronizing than Jonathan Greenblatt, the president of the ADL, who urged African Americans to “keep our eyes on the prize”, and to remember that it is Jews, not African Americans who “know from genocide”. [9], [10]

I hope that the obscenity of Charlottesville will lead all Americans to examine their complicity in tolerating institutional oppression. But in particular, Jewish Voice for Peace calls on our own Jewish community to condemn and disavow our organizational support of racism and Islamophobia, both past and present. We must embrace a vision for safety that does not come at the expense of communities of color. Only then can we truly claim to stand together in genuine, rather than merely symbolic solidarity.

4) A 1993 lawsuit regarding the ADL’s extensive spying on Muslim, Arab, anti-apartheid and other political activists also revealed that the ADL spied on and passed information to South African authorities on African National Congress leader Chris Hani, shortly before his assassination. See:
How The Anti-Defamation League Turned the Notion of Human Rights on Its Head, Spying on Progressives and Funneling Information to Law Enforcement Village Voice Robert Freidman, May 11, 1993,
National Lawyer’s Guild statement on How to Be An Ally conference: http://www.nlgsf.org/news/nlg-sf-statement-how-be-ally-conference-0

9) Eyes on The Prize: In Pursuit of Racial Justice, Stick to the Facts and Avoid the Fiction, Jonathan Greenblatt for the Anti-Defamation League, August 2016