15 Palestinian Responses to Trump’s “Deal of the Century” 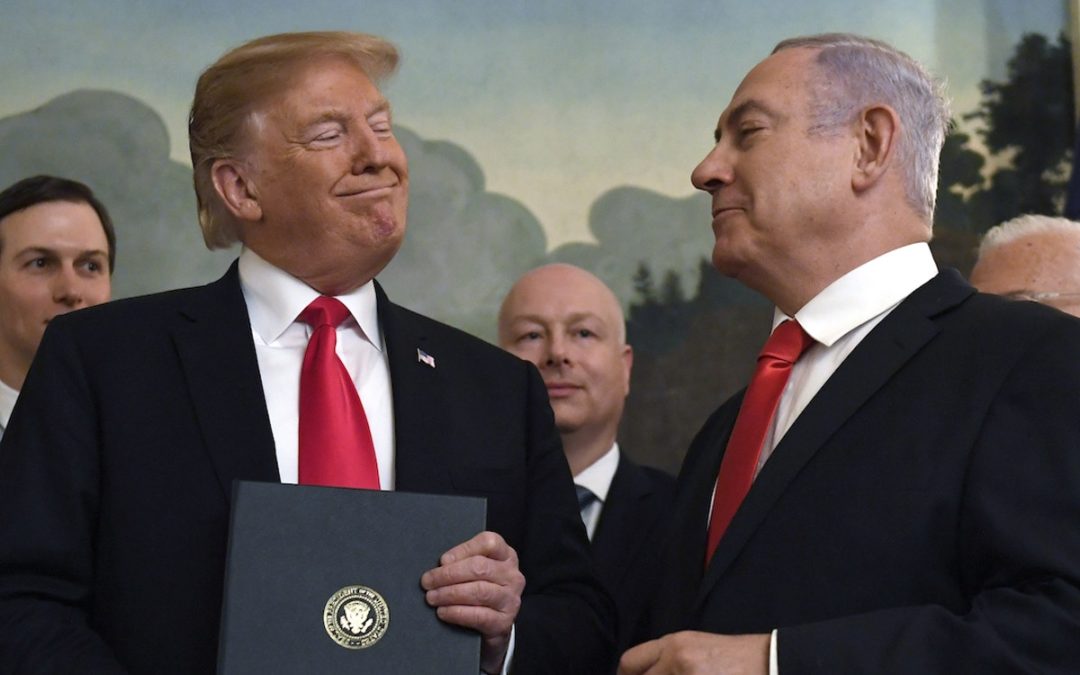 When President Trump announced his “Deal of the Century” allowing for the wholesale annexation of Israeli settlements on stolen Palestinian land under the banner of a “peace plan,” it quickly became clear that no Palestinians had been consulted in the creation of a proposal that would strip away many of their fundamental rights. In the days that followed, much of the mainstream news coverage of the Trump Deal also largely omitted Palestinian voices from the discussion. But despite this erasure, Palestinians weighed in on a number of platforms and addressed a complex range of issues including the US role in upholding Israeli settler colonialism, the failure of the Palestinian Authority, the Gaza siege, political prisoners, the proposed removal of Palestinian citizens of Israel, and alternative solutions for a just peace.

The following media roundup details a small sample of the numerous Palestinian voices that have spoken up despite the continual silencing of their perspectives by Trump, Israel, and the international community.

1) Noura Erakat Discusses the “Deal of the Century” on CNN

Noura Erakat is a human rights attorney and an Assistant Professor at Rutgers University, New Brunswick in the Department of Africana Studies and the Program in Criminal Justice. She is the author of “Justice for Some: Law and the Question of Palestine.” ​On Twitter: @4noura

“Trump’s ‘deal’ is designed to support Israeli sovereignty over the entirety of historic Palestine, while allowing it to absorb the portions of territory it deems most desirable. The most Palestinians are offered is limited autonomy over an archipelago of ghettoized enclaves. Knowing the Palestinians would unquestioningly reject this, it was clear from the outset that this was never intended to be a peace plan, but rather a position paper masquerading as a diplomatic initiative. Put bluntly, the plan is an endorsement of the indefensible by the world’s most powerful state.”

Omar H. Rahman is a writer and political analyst specializing in Middle East politics and American foreign policy. He is currently a visiting fellow at the Brookings Doha Center, where he is writing a book on Palestinian fragmentation in the post-Oslo era.On Twitter: @omarrahman

“The content of the proposed ‘peace plan’ is not a break from the past, nor is it a vision for a brighter future. It is another example of continuity in an Israeli policy of dispossession, displacement, and concentration of Palestinians and a reminder of the fraudulent notion that the United States has ever been an ‘honest broker’ for a just resolution in the region….As you read and listen to analysis of this plan, ask yourself who is speaking and who is missing from the conversation. What does it mean that an impeached president and a prime minister indicted for corruption are writing a vision for peace?”

Nour Joudah is a PhD candidate in Geography at UCLA and currently working on a dissertation examining indigenous counter-mapping and decolonization in former and current settler colonies, namely Algeria, Palestine and Hawaii. She has an MA in Arab Studies from Georgetown University.

Palestinians do not need Jared Kushner to civilize them. What Palestinians need is respect and the ability to shape the political systems they live in. They need human rights, political rights, and civil rights.”

5) Zaha Hassan – From Clinton to Obama, U.S. peace deals have paved the path to apartheid

“What has made a peace agreement illusive between Israelis and Palestinians is not the lack of active U.S. engagement with both parties, or insufficient rounds of bilateral negotiations. There has been no peace agreement because Israel, backed by the U.S., is unwilling to address the root cause of the conflict: the forced mass displacement of Palestinians and the expropriation of their land that began before 1948 and continues until today. America’s failure to compel Israel to accept its responsibility for Palestinian exile, to engage in meaningful negotiations, and to end Palestinian statelessness is what has emboldened Israel’s ongoing colonization.”

Zaha Hassan is a human rights lawyer and visiting fellow at the Carnegie Endowment for International Peace. She was previously the coordinator and senior legal advisor to the Palestinian negotiating team during Palestine’s bid for UN membership, and was a member of the Palestinian delegation to Quartet-sponsored exploratory talks between 2011 and 2012. On Twitter: @zahahassan

Rashid Khalidi is the Edward Said professor of Arab studies at Columbia University.

“Trump’s plan is not only an assault on Palestinian rights and freedom but also an attempt to put forward a new world order that completely undermines international law. Whatever the White House might say, it never expected the Palestinian leadership would accept this plan or even consider some of its terms and conditions. And that means it can continue to buy into the decades-old and quite frankly racist narrative that the Palestinian people are rejectionist and unwilling to negotiate. That was evident in Kushner’s comments: if the Palestinians don’t accept this deal, he argued, ‘they’re going to screw up another opportunity like they’ve screwed up every other opportunity that they’ve ever had in their existence.’”

8) Zena Agha – The Palestinian Authority Is a Sinking Ship

“Mr. Trump’s plan again exposes the power asymmetry between the Palestinians and the Israelis — an imbalance evidenced by the systematic denial of Palestinian rights and the enabling of Israeli expansionism. But it may nonetheless be a turning point: It will mark the end of the charade of Palestinian leadership and autonomy by proving that even when Palestinians capitulate to and collaborate with their occupiers for decades, they remain shut out.”

9) Mariam Barghouti –  Why is the Palestinian Authority unable to mobilise its people?

“Despite its rhetorical huffs and puffs, however, the Palestinian leadership could not muster a powerful reaction to the outrageous infringement on Palestinian rights that Trump’s proposal really is. It could not even mobilise its own people. Why?

Because for more than 20 years now the PA has actively participated in the repression of the Palestinian people, while maintaining a close relationship with Israeli security forces. Its attitude, rhetoric, and policies in the past and in the present have always been directed not at protecting the rights and wellbeing of the Palestinian people, but at maintaining power at any cost.

The ‘deal of the century’ has unmasked the PA’s duplicity and the toll it has taken on Palestinian mass mobilisation.”

Mariam Barghouti is a Palestinian-American writer based in Ramallah. On Twitter: @MariamBarghouti

10) Randa Wahbe: What does Trump’s deal mean for Palestinian prisoners?

“For many Palestinians, the only difference between this ‘peace’ plan and the most extreme Zionist proposals is that this one is being pushed not only by the racist leaders of a settler colony, but also by an incompetent and dangerous American administration.

Palestinian political prisoners, who have either been left out entirely or reduced to bargaining chips in past political resolution attempts, also found nothing new in the plan which promised them neither freedom nor justice.”

Randa Wahbe is a PhD candidate in Anthropology at Harvard University. On Twitter @randawahbe

“Now, as Trump’s new Middle East plan silences the voices of Palestinians, our stories, our realities, more than ever, Europe has a decision to make.

The EU has for years expressed its ‘deep concerns’ over Israel’s targeted killings and illegal settlements. But pro-Palestinian activists increasingly face censure and restrictions in European countries… Europe today faces a real test: Will it value the principles of freedom of opinion, expression and movement and the international law that underpins these – or will it help in the continued silencing and stifling of Palestinians?”

Ahmed Abu Artema is a Palestinian journalist and peace activist. On Twitter: @aburtema

12) Aida Touma-Sliman – Strangers in Our Homeland

“The plan would also have dire consequences for Palestinian citizens of Israel, many of whom would probably be stripped of their citizenship and transferred to the new Palestinian ‘state’ under the plan’s proposed land swaps. To those ends, Israel’s Tourism Minister, Yariv Levin, has already raised the specter of de-nationalizating Israel’s Palestinian citizens, who make up about 20% of the population, or about 1.8 million people. Many people in this category would likely lose the ability to travel within most of historic Palestine and be subject to the same restrictions, including on movement, imposed on citizens of the new Palestinian ‘state.’”

“Trump’s ‘deal of the century’ for Israel and Palestine is an absolute farce that has left me imagining a third Intifada, more curfews, military assaults and detentions. I can feel the sadness of my grandparents, who were uprooted from their home during the Nakba in 1948, and the disappointment of my parents who grew up as part of the revolutionary generation in Jabalia refugee camp during Israel’s occupation of the remaining 22 percent of our lands.

Palestinians will – and must – resist and fight back and there will be more loss of life and more of what we witnessed every Friday at Gaza’s Great March of Return protests.

I know only too well the response to even peaceful protest. The Israeli occupation’s brutal repression of any kind of resistance is a reality I grew up with.”

We have to move beyond the one- vs two-state solution debate, and try to pursue the more accurate approach – the rights-based struggle coupled with a clear-cut political vision that can be realised within the framework of a unitary state with guaranteed equality for all its citizens regardless of religion, ethnicity or gender.”

Haidar Eid is an associate Professor at Al-Aqsa University in Gaza. On Twitter: @haidareid

15) Marwan Bishara – It is time for a Palestinian spring

“[W]ith almost as many Palestinians as Jews living between the Jordan River and the Mediterranean Sea, and with a maximum distance of a few kilometres separating any Palestinian from any Jew, Israel-Palestine is increasingly a binational reality. Israeli annexation of new territories will only help underline this fact.

In this context, no nukes, no air force and no walls will define the future relationship between the affluent centres and ghettos, between rich cities and their belts of poverty, indeed between next-door neighbours. Israel may continue to use brutal force against the Palestinians, but like every colonising power in the past century, it will not be able to subdue a determined indigenous population with violence.
There is a demand for a change of vision based on ethical not religious awakening, one that transcends fetishist archaeology and sacred sites to honour sacred human rights for all.”

Marwan Bishara is the senior political analyst at Al Jazeera. On Twitter:@MarwanBishara