This Is How I Spell ‘Unruly’

The text is a combination of English and Hebrew, in Solitreo lettering, and reads “Unruly” (the name of this blog) and intertwined below it, “Lo Nechmadot.” It was designed originally as one half of a T shirt for the Jews of Color and Sephardi/Mizrahi Caucus.

The name Unruly is a play on the historical treatment of Jews of Color as “savage,” unpredictable, and unmanageable force 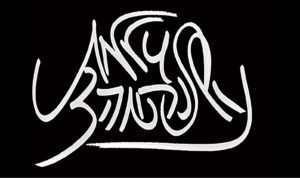 in Israeli and white-dominated Jewish society, a stereotype also utilized in American racial history and politics. It was exemplified in Golda Meir’s notorious words after hearing the demands of the Israeli Black Panthers in 1971: “Hem lo nechmadim,” or “They’re not nice.” The expression is currently memorialized in a Jerusalem alley in the Musrara neighborhood. 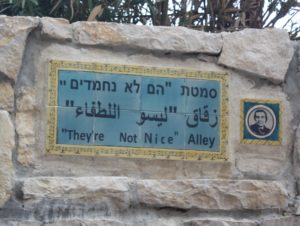 “Lo nechmadot” puts Golda Meir’s quote in the feminine, a purposeful subversion of the extremely gendered nature of the Hebrew language.

The letters are not in the Ashkenazi cursive commonly used in Yiddish and modern Hebrew, but rather in Solitreo, an older Sephardic style of cursive. Solitreo was based on Rashi script, a 15th century Hebrew typeface used for Rabbinic commentary and printed Judeo-Spanish, also known as Ladino or Judezmo. This was the language of the Sephardic Jews in the Iberian Peninsula, and in the diasporic communities throughout the Ottoman Empire after their expulsion from Spain in 1492, and Solitreo was the cursive style they used to write it by hand. In the late 19th and early 20th centuries, due to cultural and linguistic assimilation, and perhaps especially a Turkish administrative decree in 1928 prohibiting the publication of Judeo-Spanish in Hebrew characters, Sephardic Jews began to use the Roman alphabet instead. Today very few people speak Judeo-Spanish.

The repurposing of Solitreo, in a style that evokes Arabic calligraphy, serves as a reminder that despite Zionism’s desire to separate Arabs and Jews, the two have shared the same culture in medieval Spain and throughout the Middle East and North Africa.

Danny Bryck is a playwright, actor, activist, and educator of mixed heritage based in New York.