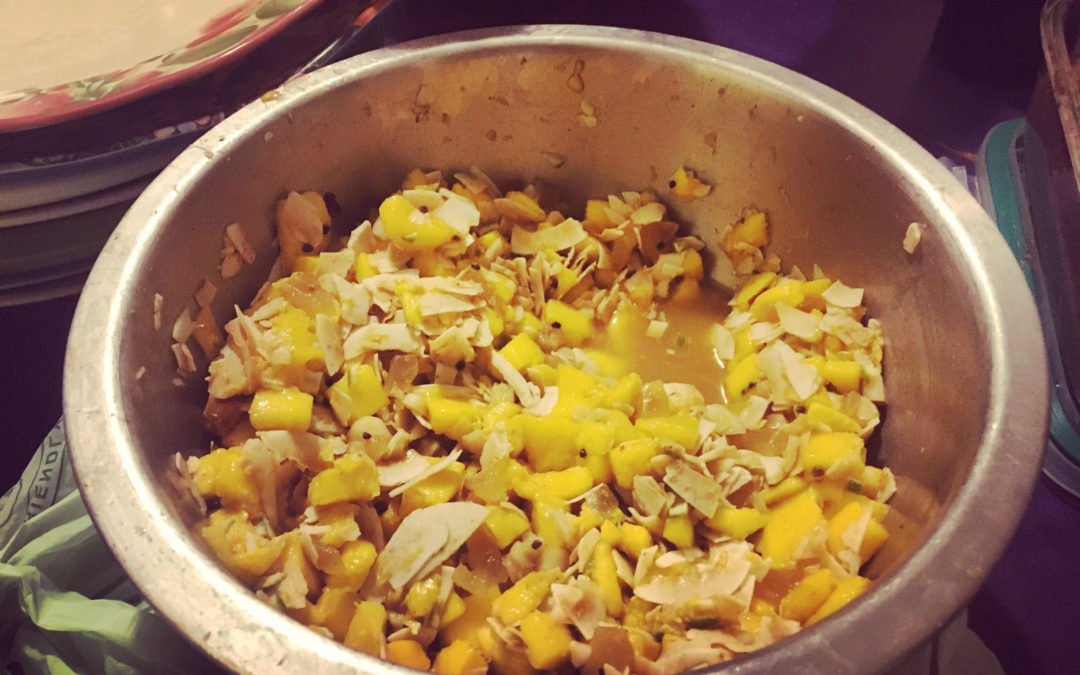 How We Eat (from Masa Ball Soup)

Inca potatoes are made into Indian curry, German potato salad, Irish leek soup, and Ashkenazi latkes.  Chinese oranges grown in Spanish groves become English marmalade.  California farms grow kiwi from northern China, Persian melons, and Mezoamerican beans.  The sweet potatoes of tropical South America become a staple in China, Korea and Japan.   Whether we’re fleeing war and natural disaster, seeking trade and new resources, or fall captive, enslaved for the enrichment of others, people have been moving for as long as we’ve been people, and our foods move with us.

The knowledge of our home cuisines goes with us into exile, into captivity, into migration. We carry tiny pockets of precious seeds sewn into our clothing or hidden in our hair, find substitutes for long lost condiments, vegetables and meats, and wherever we are, we experiment, exchange and combine flavors with neighbors, pair Asian rice with American beans, add American tomatoes to Italian focaccia, and invent California Rolls in L.A.

I grew up in the mountains of Western Puerto Rico with two New York born parents, one Puerto Rican Catholic and one Ashkenazi Jew with roots in the Ukraine, who blended two cuisines that were already the result of thousands of years of migrations, invasions, captivity, and commerce.

My maternal, Puerto Rican cuisine is the result of Arab trade routes, the Spanish invasion of the Americas, and the Atlantic slave trade.  It is built on rice, citrus and chicken carried from Southeast Asia to Spain by Arab merchants; Mediterranean olive oil, olives, raisins and oregano; Mezoamerican beans, avocados, tomatoes, peppers and corn; Indigenous Caribbean seafood, bananas, greens, and roots (yautía, yuca, malanga, boniato, ñame,) West African herbs, spices, vegetables, and plantains, and above all the adaptive genius to blend African recipes and techniques with Caribbean ingredients.

My paternal cuisine grew from the farms and shtetls of Eastern Europe, the beets and buckwheat, eggs and dairy, onions and apples of Eurasia, potatoes brought from the Andes, Mediterranean eggplants, chickens from Southeast Asia, cinnamon from India, white fish and pickles, cabbages, and the wheat I can no longer eat.

My mother grew up in Harlem and later the Bronx, surrounded by migrants.   Picked on by the Italian and Irish kids, she made alliances with Eastern European Jews, and grew up eating blintzes and kosher dills in the homes of her friends.  For my father, eggs, dairy, tomatoes, and sugar were the four food groups.  So, he Ashkenazified guacamole by removing jalapeños and adding hard boiled eggs.  It was after he met my mother that he became the world’s best Jewish tostón maker.

My parents moved to Puerto Rico in 1951 because they were blacklisted communists facing my father’s possible drafting into the Korean war.  They bought an abandoned coffee farm and raised vegetables and hens, selling produce and eggs from the back of a battered pickup truck and astonished the neighbors by eating sautéed greens, snow peas and chard, cottage cheese and egg salad with our rice and beans and fried plantain.

In that remote mountain community, we were the only Jews we knew, but Jews have been in the Caribbean since the very earliest days of the European invasion.  Sephardic Jews, expelled from Portugal and Spain, joined Europe’s imperialist venture as slave traders and merchants.  They settled on indigenous land, and participated in the same crimes of genocide and slavery as their Christian counterparts.  They also took part in social justice movements against colonialism, for abolition, and feminism, and the rights of workers (www.radicalismojudio.org). By the 18th century, half the Jewish population of the Americas lived in the Caribbean and the mainland Dutch colony of Suriname.  There were many Jews hidden among the early Spanish settlers of the Antilles, but if they were among my ancestors, the evidence has been lost.

My paternal family left Ukraine between 1890 and 1906.  My great-grandfather Abraham went to Canada and then New York.  His first cousin Alter went to Argentina, where many of his descendants still live, though one branch also ended up in Puerto Rico.  For two Jews from the little Ukrainian village of Yazer, Brooklyn and Buenos Aires were equally strange, but to my US Ashkenazi relatives who have fully assimilated into whiteness, to most white US Jews, Caribbean and Latin American Jews seem an improbable, exotic oddity.  And when my Brooklyn father and Harlem mother joined forces and produced three children who are also Caribbean Indigenous, West and North African and Iberian, our existence itself became incomprehensible, incredible, at best a quirky sidebar to the dominant narrative of US Jewish identity, at worst, an impossibility that white people, Jewish and not,  literally can’t wrap their minds around.

As a young adult in the Bay Area in the early 1980s, I was part of an upsurge of Jewish feminist and radical revisions to traditional Jewish celebrations.  I was working at La Peña Cultural Center, founded by Chilean exiles after the 1973 military coup, and wrote a haggadah that interwove the stories of Central American political refugees with the Exodus. But this cultural movement, like all the Jewish communities I had come across, was dominated by Ashkenazi Jews to whom my Puerto Rican identity made no sense, and was either tokenized or ignored.

One way I began to assert myself in those spaces was by inventing Puerto Rican twists on Ashkenazi recipes.   In the food memoir I’m writing, Masa Ball Soup, I reveal the plantain as a quintessential Caribbean Jewish food, (and a great gluten free substitute for matzo and matzo balls) share Picaflor, the appetizer that Cuban Jewish anthropologist Ruth Behar and I invented, that pairs lox and guava paste, and celebrate Mango Charoset, which I dreamed up after someone told me about the 18th century, sand floored synagogue in St. Thomas, the oldest continuously operating synagogue in US territory, and I started imagining an ancient Caribbean seder of our own. And because I am a child of storytellers, because I learned to cook on the wood fires of illiterate elders and measure ingredients by their weight in my hands, my recipes are not formulae.  They’re legends.

You begin with ripe mangoes, firm enough not to disintegrate when diced, but already almost unbearably sweet.  Sniff each skin, press each fruit for just the right amount of give. Pick enough to fill your arms, and go home.  With a sharp knife, cut parallel to the pit, all the way through, making two flushed cheeks, dripping with juice.  Cross-hatch the inner flesh, cutting all the way to the peel.  Then flip it inside out, so the cubes of mango pop up like an old-fashioned swimming cap. Tickle the pieces away, and drop them into a big bowl.  (After that, you attack the pit with your teeth, and tear away the fibers until there is nothing but a bone white, chewed up seed and juice all over your face.)

Fruit, nuts, alcohol and spice are the essentials of charoset. But don’t imagine apples, walnuts and wine.  Start chopping handfuls of candied ginger and dropping them into the bowl.  Peel a couple of ripe limes , dice the rind, and squeeze the juice into the mixture.  Your hands will be sticky.  Go ahead and lick them.  Now stir in a whole lot of grated coconut, fresh if you can, or at least moist.  Sometimes I add chopped pecans, tipping my hat toward the Algonquians of North America, in the sweet sunny south before plantations.  Now come the spices: Antillean allspice and cayenne from what is now Guyana, Moluccan nutmeg, white pepper of India, and pan-South Asian cardamom.  Mix it with your hands, kneading it together, inhaling the mingling of acid and sweet, hot and delicate.
The last touch is the rum.  The spirits. The touch of fire.  Choose a good dark one.  How much do you like the people you’re cooking for?  If you love them very much, use all your pull to hustle up some Barrilito, the very best Puerto Rican rum there is, made by a nationalist who refuses to mass market to the US.  Three star is hard to get outside the island, but with luck, you can get two star.  If you live far from a barrio, it’s fine to go with another brand.  The Bacardi family fled revolution from Cuba to Puerto Rico leaving behind a B shaped swimming pool at their former estate in Havana, where I got rehab after my stroke.  I use their rum to toast their involuntary contribution to socialist medicine.  Any rum you choose is loaded with history.  Sugar and rum stoked the engines of genocide, slavery and war in the Caribbean for centuries, but rum was invented by slaves who experimented with fermenting molasses, seeking solace, celebration, and survival.  Caribbean charoset pays tribute to our own resistance and survival, our conspiracies and uprisings, subversion and persistence, and acknowledges the deep suffering that has also shaped us.  So, make it early in the day, and give the rum and ginger, spices and juices time to mingle and saturate each other, and become something sweet and strong and hot, enough to go on with.