Confronting Whiteness, Zionism, and the Bogeyman of “Left Antisemitism” 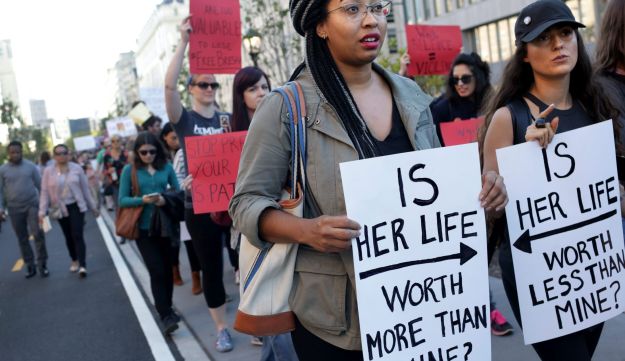 Remarks from JVP’s “Not A Conflict” mini-conference (November 13, 2017), in response to the question: How do you see fights against antisemitism connected to or in tension with other fights for racial justice and against Islamophobia?

I want to talk about one of the biggest threats to broader Jewish participation in racial justice movements: the inflated narrative of “left antisemitism”. I’ll explain what I mean by that with a few anecdotes.

One of the most disturbing things that I have witnessed over the past year in American Jewish politics — even more so than trends of Jewish cemetery vandalism, or the chanting of Nazi slogans at white nationalist marches — is the way that some white American Jews have responded to these events with a sense of smug satisfaction or even glee.

Case in point: a Times of Israel article from March of this year described the silver lining to Jewish college students “getting it from both the political left and the political right.” Citing the perceived exclusion of Jewish students from racial justice activism, one campus Hillel director exclaimed that the recent slew of antisemitic bomb threats would play out poorly for BDS activists and was “challenging the narrative that [Jews] are white and privileged.”

In the months to follow, after white nationalist demonstrators in Charlottesville chanted “Jews will not replace us” while marching in defense of the city’s Robert E. Lee confederate monument, I saw a similar sentiment playing out on supposedly progressive Jewish social media: actual expressions of excitement that the antisemitic nature of the march might mean that non-Jews would take antisemitism more seriously.

We desperately need to confront the political implications of this narrative. What does it say about white American Jewish privilege that neo-Nazi marches are seen as “useful” insofar as they prove white Jews’ oppressed status? What does this say about white Jewish reluctance to defer to those most impacted by Charlottesville — namely, Black Americans whose historical enslavement Richard Spencer and his followers defend and celebrate?

So — when fears of “left antisemitism” function primarily to silence criticisms of Zionism and American Jewish participation in white supremacy, why is it gaining traction amongst ostensibly liberal and progressive Jews? One reason is that the left has failed to offer a meaningful alternative to the Jewish right’s framing of anti-Semitism as, as Hannah Arendt described scornfully, “the natural consequences of an eternal problem.” Besides abstracting antisemitism from the conditions and structures that create it, this framework lends itself to perceiving Jewishness as a state of static victimhood, making too many progressive Jews unwilling to see themselves as oppressors, whether as enactors and beneficiaries of the Jewish supremacist state of Israel, or as accomplices to the perpetuation of white supremacy in the United States.

Every few weeks, my social media feeds are flooded with a new round of headlines about supposed Jewish exclusion from the antiracist left: from the Movement for Black Lives declaration of Palestine solidarity, the removal of Zionist provocateurs from the Chicago Dyke March, or the supposed exclusion of Jews from the March for Racial Justice. While many of us may ridicule Yair Netanyahu’s claims that Black Lives Matter and BDS pose a greater threat to Jews than the alt-right, the reality is that such false equivalencies are echoed across the Jewish political spectrum. We need to ask — whose feelings are being centered by such hand-wringing? And whose suffering under the violence of white supremacy, antiblackness, and settler colonialism in the U.S. and the state of Israel — is obscured in the process?

In the end, as with most issues of race and power, these questions come back to whiteness. Antisemitism, past and present, cannot be used as a get-out-of-jail-free card to excuse the violence of Zionism or the reality of white Jewish privilege in the United States. When Benjamin Netanyahu tells EU leaders, as he did this July, that “East of Israel, there is no Europe,” he’s making an appeal to white supremacy grounded in a claim to Ashkenazi whiteness. We should take him at his word. And when American Jewish institutions like the ADL facilitate worst practice police exchanges between Israel and the United States, or when the Jewish Federations funnel contributions to Islamophobic hate groups, they too are choosing a side on the color line. The real threats of antisemitism in the US are not an excuse to retreat from these realities. I too, want to do the work of incorporating a critique of antisemitism more deeply into racial justice movements. But if that work is going to have an impact other than simply silencing and shaming activists of color, white American Jews will first have to do the work of honestly confronting whiteness, white supremacy, and Zionism.

Mark Tseng-Putterman is a writer and PhD student at Brown University’s Department of American Studies, where he focuses on Asian American social movements and comparative ethnic studies. He is a member of the Jews of Color Caucus organized in partnership with Jewish Voice for Peace.