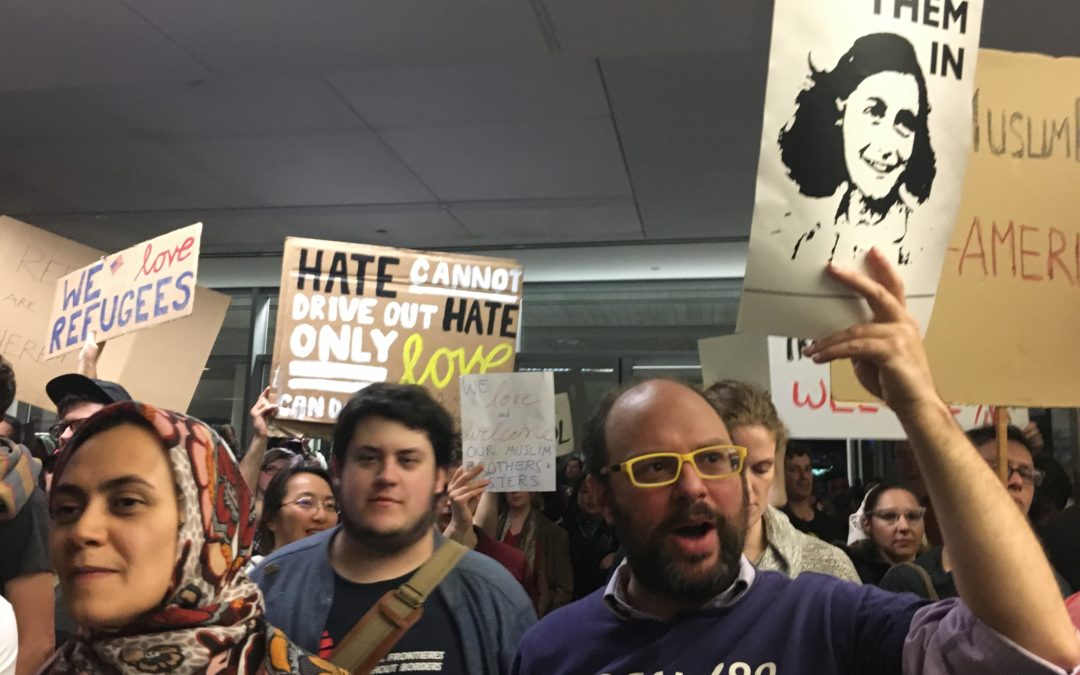 Muslim travelers are detained at the airport and questioned, without access to lawyers, about their social media accounts and about their immeasurable loyalty to the country they are about to enter. They are threatened with deportation. The whole ordeal lasts several hours.

For seven hours I stood in solidarity, together with over a thousand protesters, filling an airport with our signs and our chants, and we did not leave the airport until we got news that all the detained people were released.

On separate occasions over the last five years, I was forced to sit in silence twice for over seven hours at a time in a small, windowless room where people were being held for secondary questioning. I waited in silence and frustration, with no signs and no chants, and only left the airport after the detained people—my friends—were led by a guard to an airport jail, where they would spend the night behind bars, on their way to being deported the following day.

Two different airports; Two different outcomes. The first, an airport in the US where so many of us have been protesting against Trump’s Muslim ban. The second, Ben Gurion Airport in Tel Aviv, Israel, where Israel imposes a de facto ban on Muslims and Palestinians.

It is true that Muslims from countries not listed (Iran, Iraq, Libya, Somalia, Sudan, Syria and Yemen) can still enter the US. It is also true that in the case of Israel, “some U.S. citizens of Arab or Muslim heritage have experienced significant difficulties and unequal and hostile treatment at Israel’s borders and checkpoints,” as the US State Department declares in in characteristically veiled diplomatic language (https://travel.state.gov/content/passports/en/country/israel.html). But make no mistake, in both cases, the ban applies exclusively to people according to religion and nationality.

At an American airport, some Muslims with valid visas are denied.

At an Israeli airport, some American Muslims and American Palestinians—who do not require an entry visa by virtue of holding an American passport—are denied.

The parallels are clear, but there are too many in the American Jewish community who refuse to see them.

To many, it seems easier to protest the Trump Muslim ban, making reference to the Jewish past while ignoring the Israeli present. We talk about the Jewish refugees escaping persecution that were allowed into the US and about those who did not and perished in the Holocaust. But we do not talk about the Palestinians who are not allowed into Israel, or even into the Occupied West Bank, whose borders Israel controls. We hear the stories of Jews who had never set foot in America but were welcomed here the last 120 years. We honor their presence even as we mourn the death of others who perished in the Holocaust when the refugee doors to the US were shut. But as we look back into our past, we avoid looking east into our present, choosing to ignore the right of return of Palestinian refugees who lived for generations in Palestine and were uprooted from their land about 60 years ago.

I remember in particular a friend of mine who wanted to visit his family in Palestine for a mere two weeks being questioned for hours at Ben Gurion Airport, “What are you doing here? Why don’t you go to Jordan? You have no right to be here.” His family can trace continuous residence in Jerusalem for the last 800 years.  He was one of the luckier ones. After a humiliating hours-long interrogation, his American passport was honored and he was allowed in.

This is not a single story. These dramas at Ben Gurion Airport happen again and again. But American Jews are by and large silent.

Why should Israel be the exception in our moral universe?

The author of this post has chosen to remain anonymous.